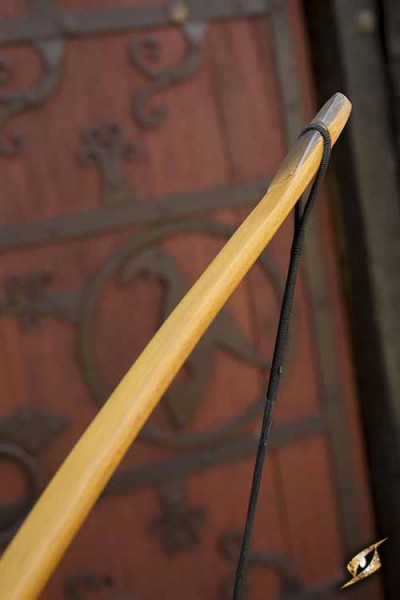 The Osage Nation (Ni-u-kon-ska, "People of the Middle Waters") is a Midwestern Native American tribe of the Great Plains who historically dominated much of present-day Missouri, Arkansas, Kansas, and Oklahoma. The tribe developed in the Ohio and Mississippi river valleys around 700 BC along with other groups of its language family. They migrated west of the Mississippi after the 17th century due to wars with Iroquois invading the Ohio Valley from New York and Pennsylvania in a search for new hunting grounds. The nations separated at that time, and the Osage settled near the confluence of the Missouri and the Mississippi rivers.

The term "Osage" is a French version of the tribe's name, which can be roughly translated as "warlike". The Osage people refer to themselves in their indigenous Dhegihan Siouan language as Wazhazhe, or "Mid-waters".

Made of a wood traditionally used for bows, the Osage Orange Wood LARP Bow has a gorgeous finish to its wood grain, resulting in an authentic, historical look. It is perfect for hunting food or foe and for crafting your native shaman character or your animalistic, savage elven character. In iconic longbow style, this bow is great for LARP, practice, and more. The tips of the bow are reinforced with fiberglass, and the grip has a laced-up, leather-like wrap. Both right-handed and left-handed archers can use this ambidextrous LARP bow. Its draw weight is approximately 13 kilograms / 448 oz, and the string is included. Practice your technique or strike an enemy at range with this real wood LARP bow.

As this item is made from natural materials, please note that appearance can vary slightly from what is shown. The draw weight can also vary by 5 pounds above or below the listed amount.